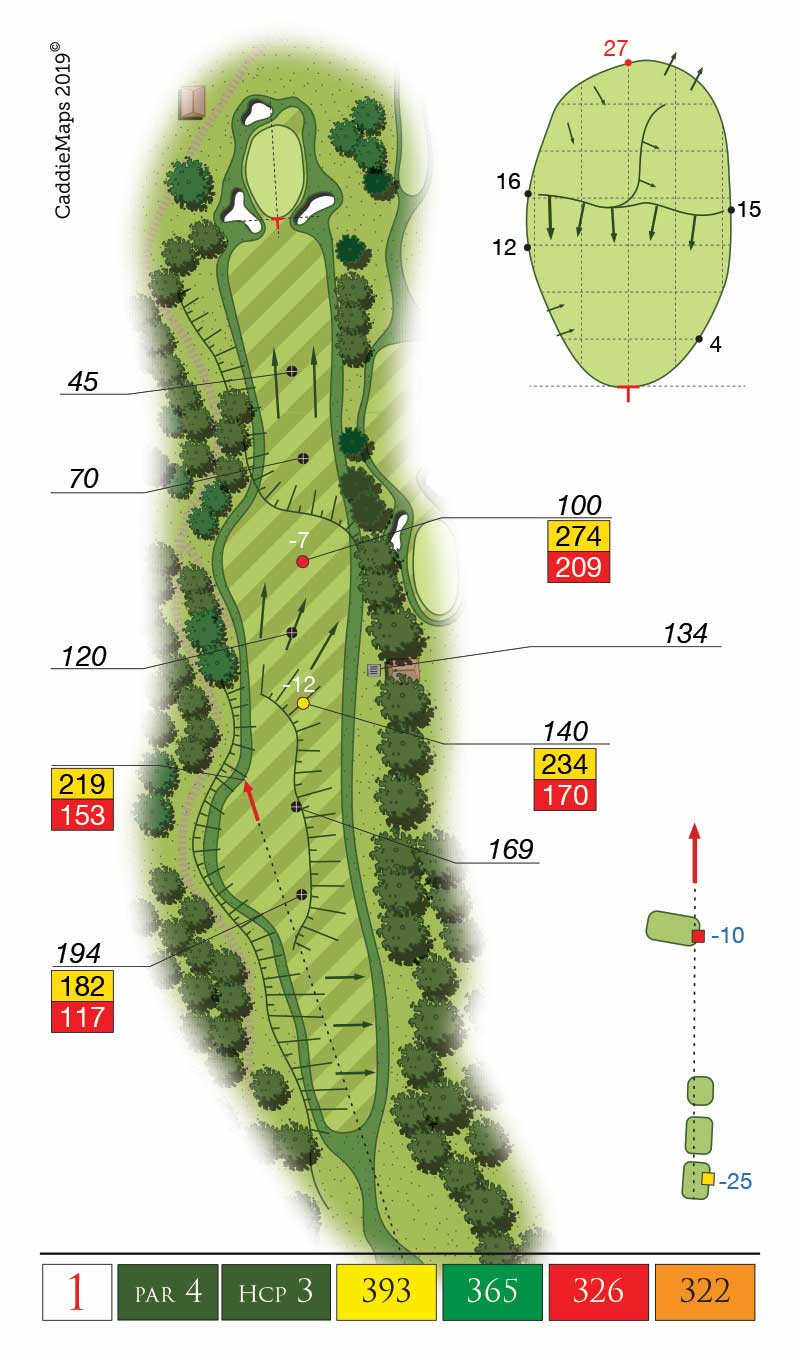 A downhill drive between trees to a left down to right sloping fairway that requires careful placement to obtain approach shot rewards on a bunkered, gently-sloping green. 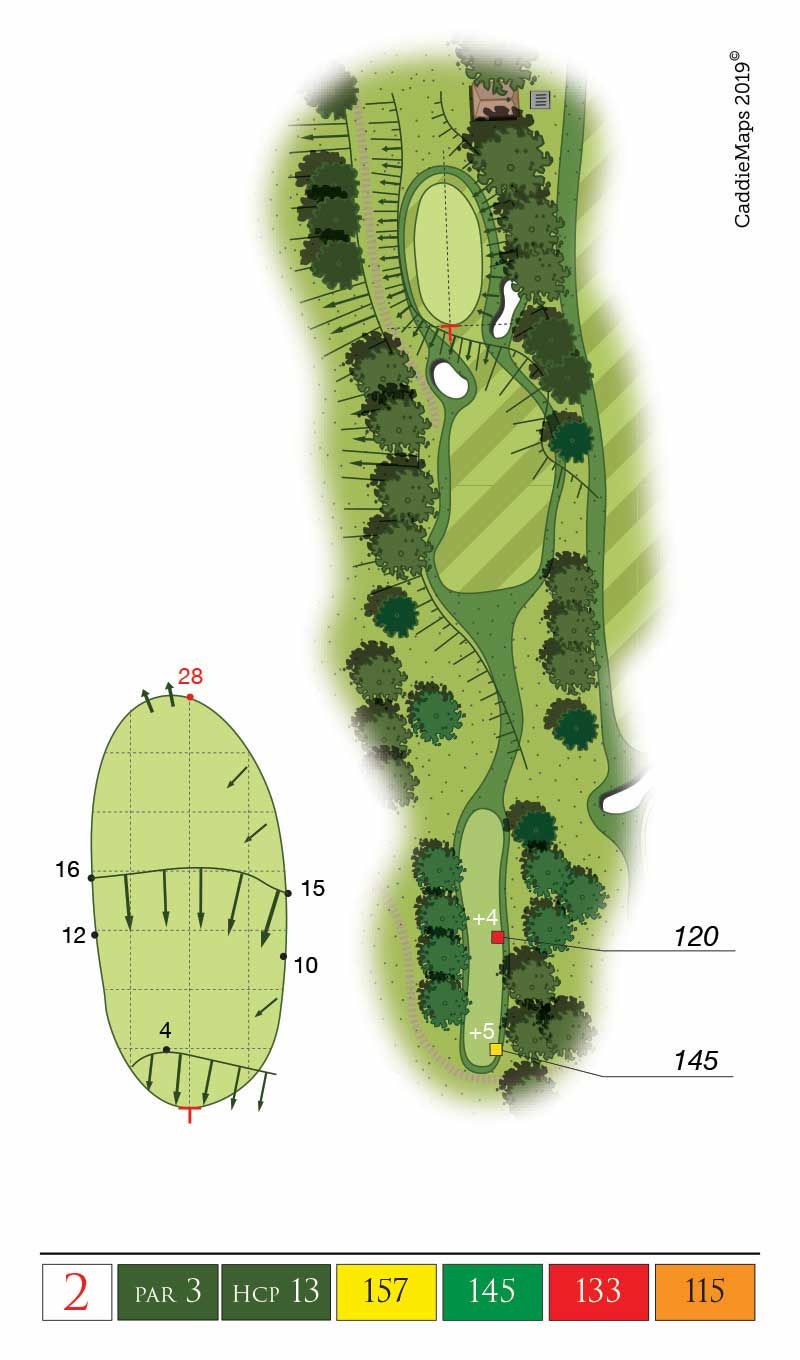 Slightly uphill to a green (raised at the front and left and bunkered on both sides at the front), whose putting surface rises steeply to a higher rear tier; the casetta (small building) behind doesn’t come into play. 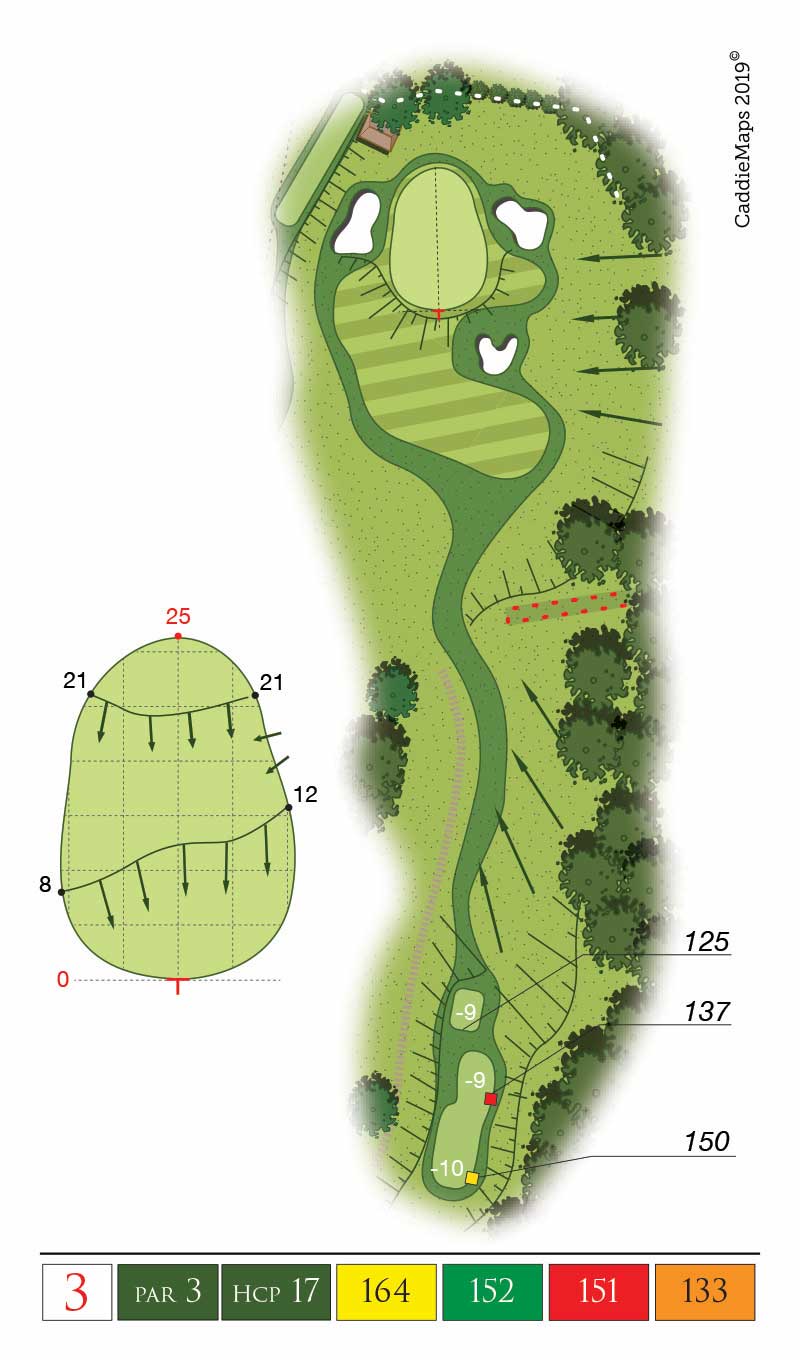 A medium lenght drop hole to a triple-bunkered green, whose putting surface rises in three subtle leaves most evident on the right., overlooked by a ruined casetta on the left. 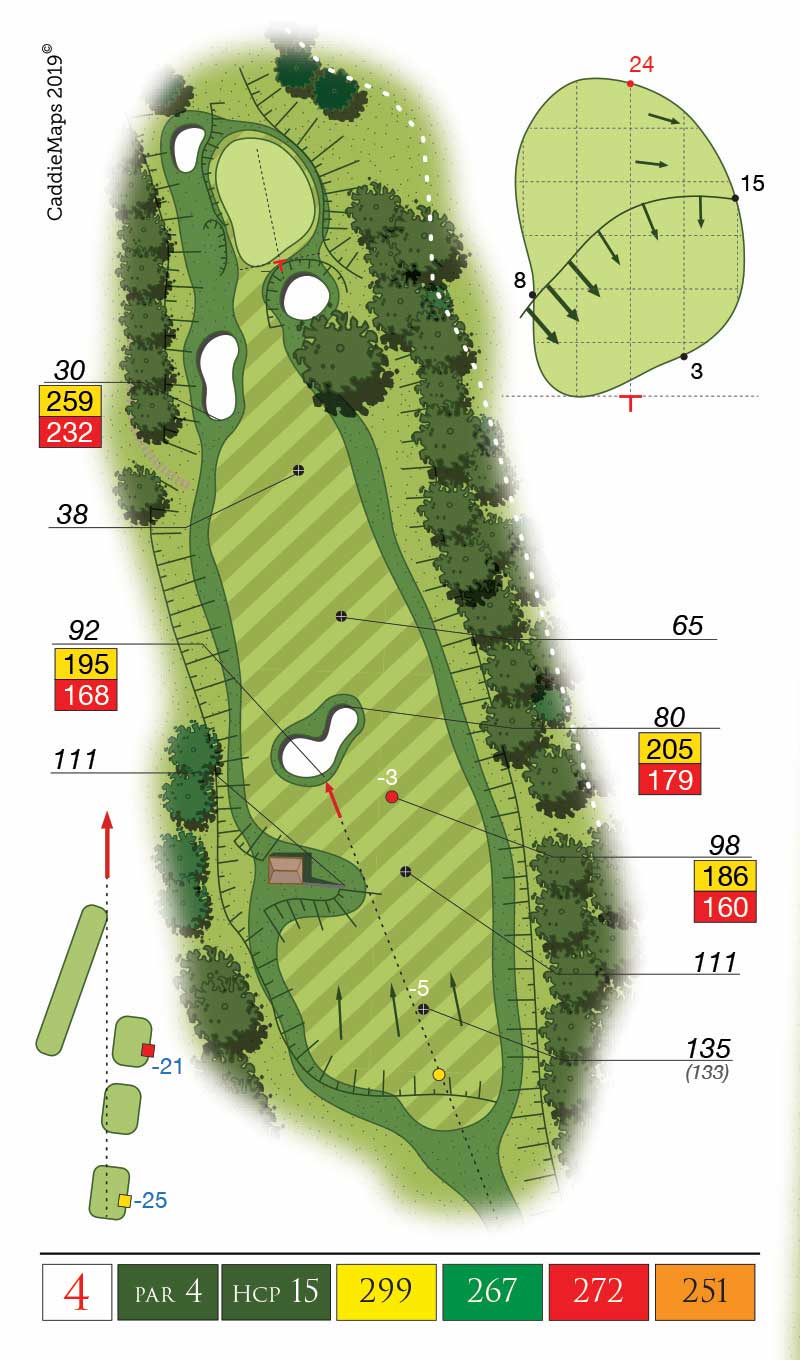 Big hitters take risks to drive downhill to the narrow entrance of the raised, slightly left-tilting green, sloping gently up to the back. A casetta, the stand of trees to the right, plus fairway and greenside bunkers can also come into play. 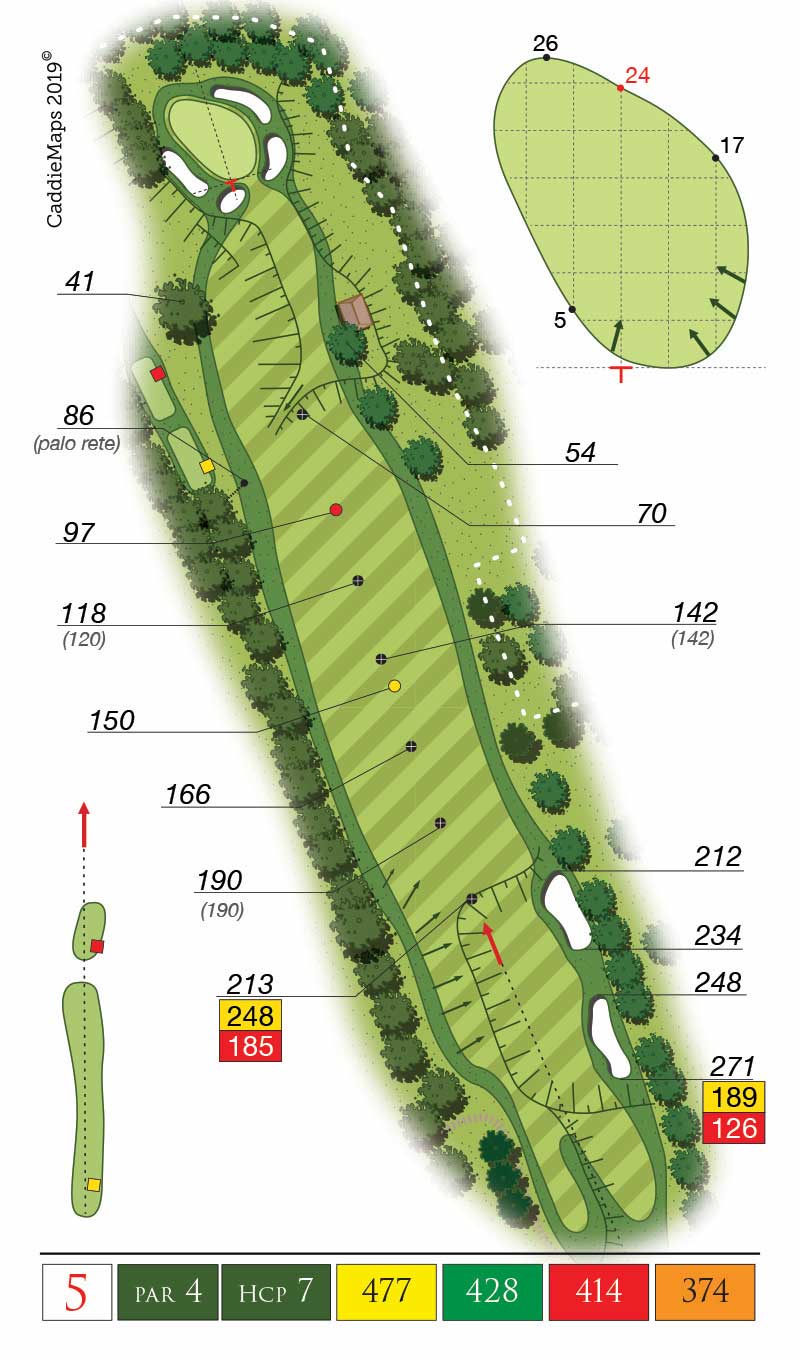 From a tee in the trees, almost level with the green, drive out into a wide left-down-to-right sloping fairway, with two hidden bunkers on the right; thence one or two shots over slightly lower ground to a raised, relatively flat quadruple-bunkered green. 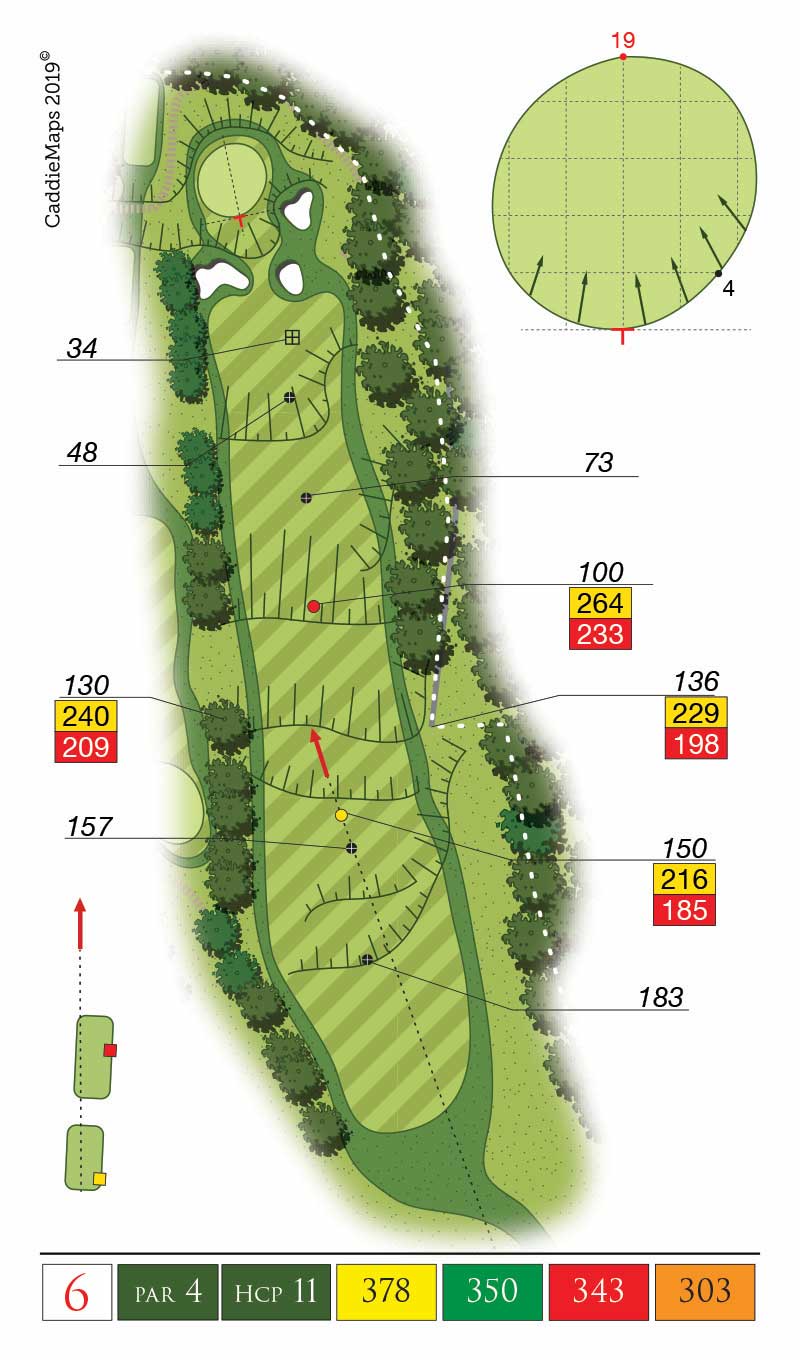 Initially a gentle andante downhill from a tee in the trees, the wide fairway then descends in a crescendo of cascades to a green sloping from front right down to back left, fronted by an array of bunkers. 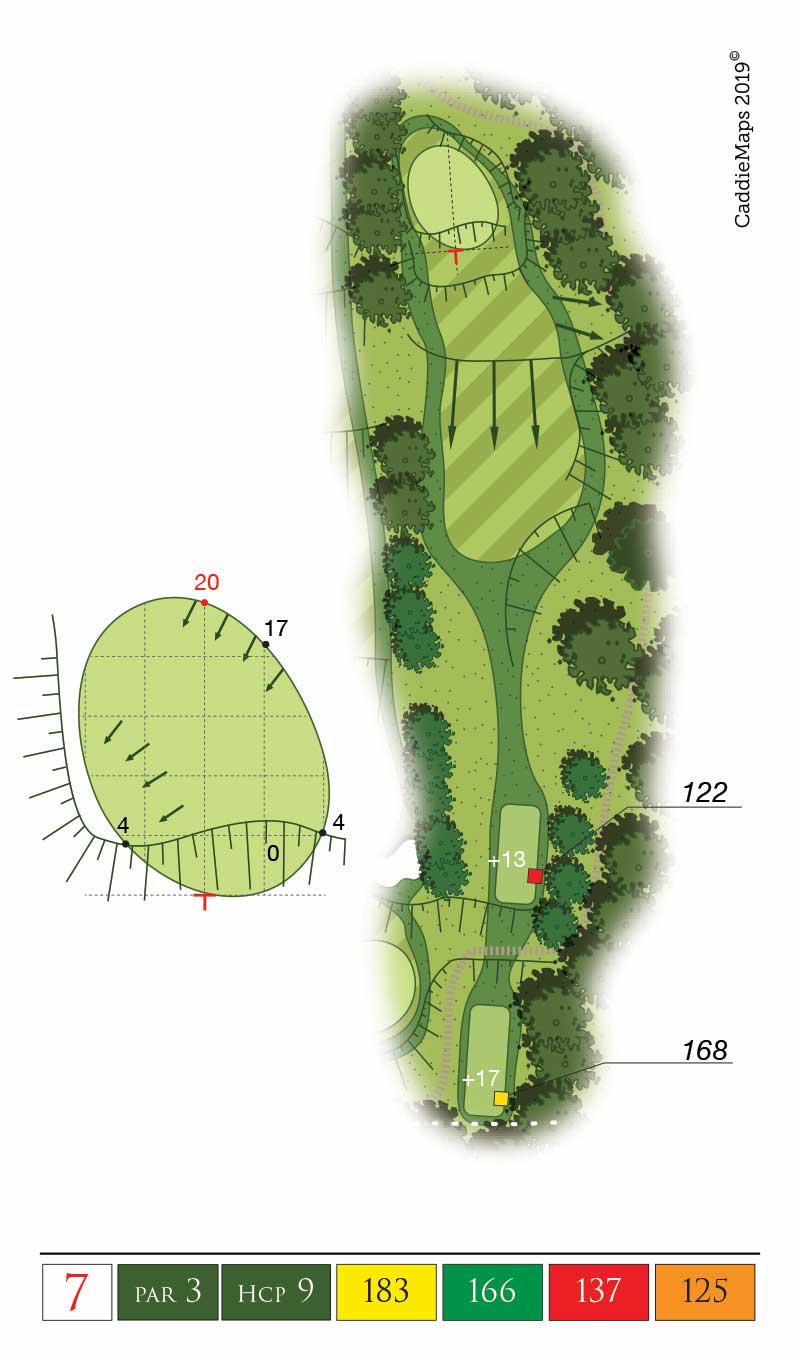 From the lowest point on the course, a demanding uphill par 3 which may require everything of the player; a couple of banks and a steep lip at the front belie the mildly up-sloping monoplane putting surface, banked on the right. 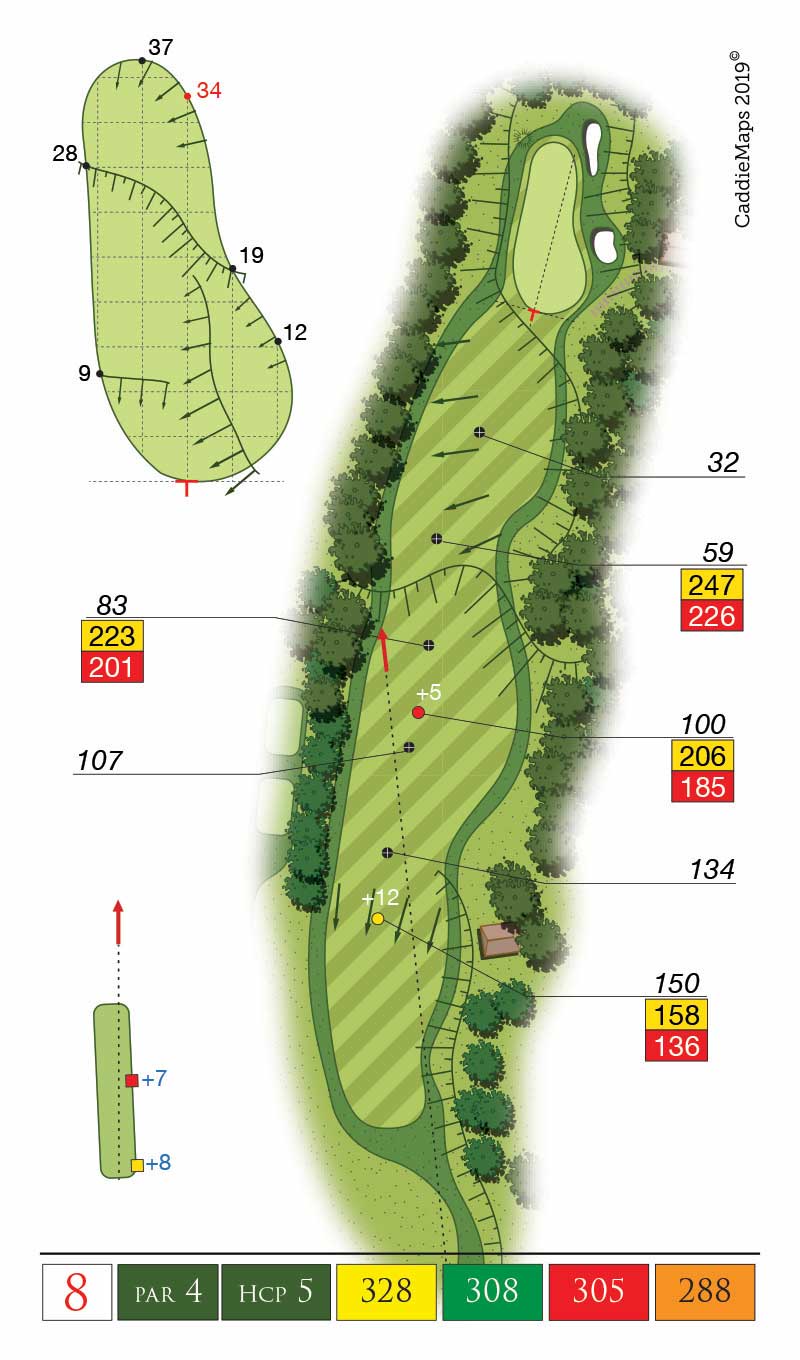 Gradually left to right, and uphill past a large casetta, this two shot hole features the course’s longest green, which thins as it sloped up to a higher tier, defended by a bank down to the left and a bunker up to the right. 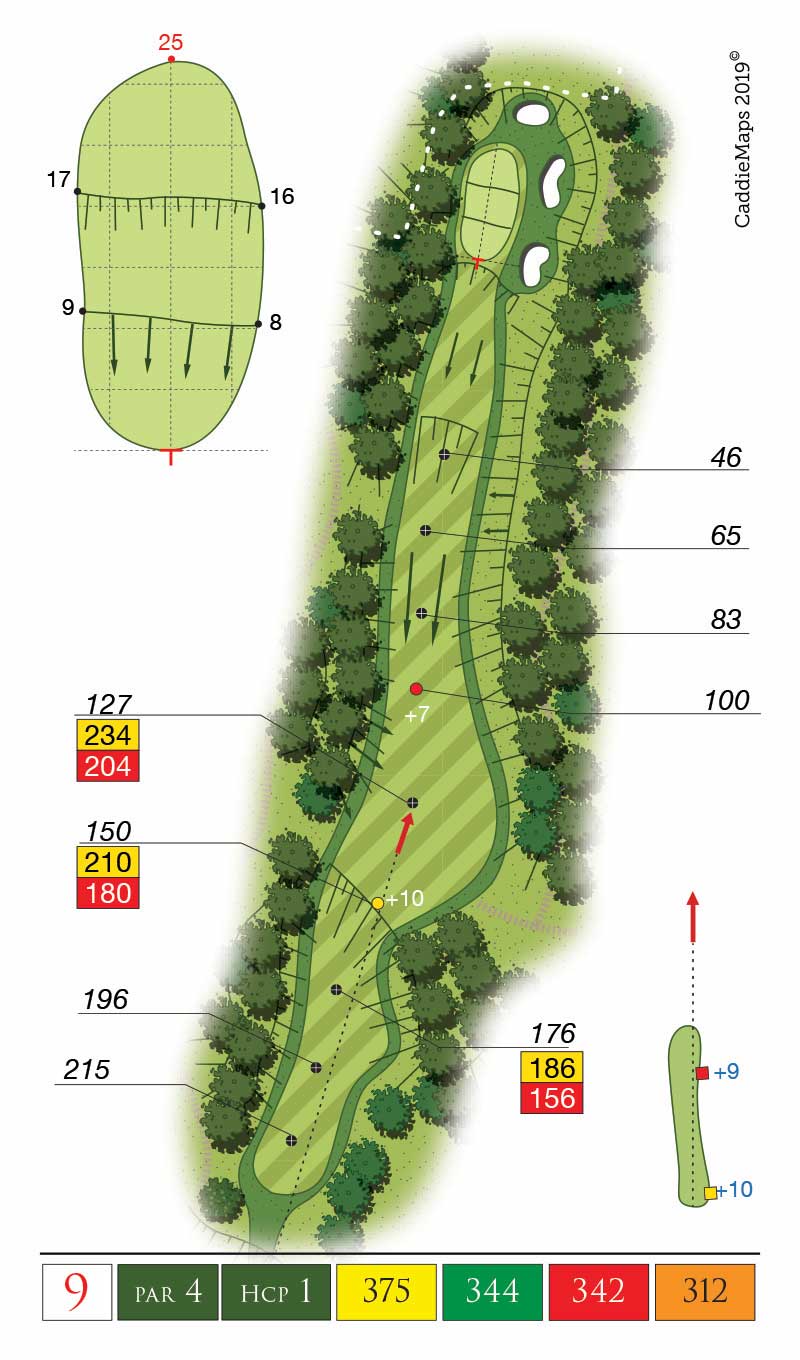 Challenging to reach in two, this straight hole rises to a wider-to-the-right-than-it-looks plateau for the drive, and gain over a small brow, which foreshortens the triple-right-bunkered green that rises over three tiers (more pronounced on the right). This takes us out in 2754/2423m Par 34/34. 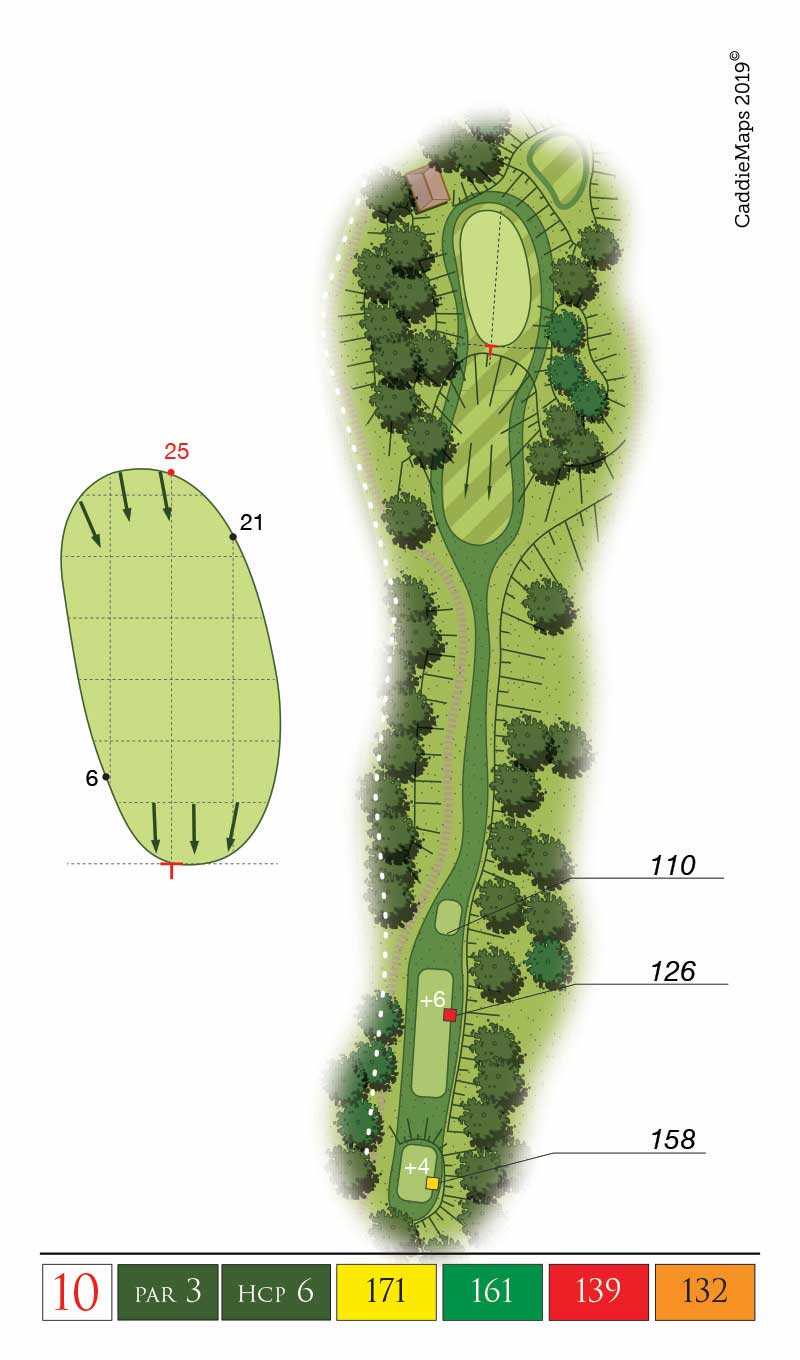 Played over a valley through a narrow tree-lined corridor slightly uphill to a gently-rising green, with mild run-offs to the right and steeper to the front, this engaging par 3 is backed by the casetta that serve as the half-way house. 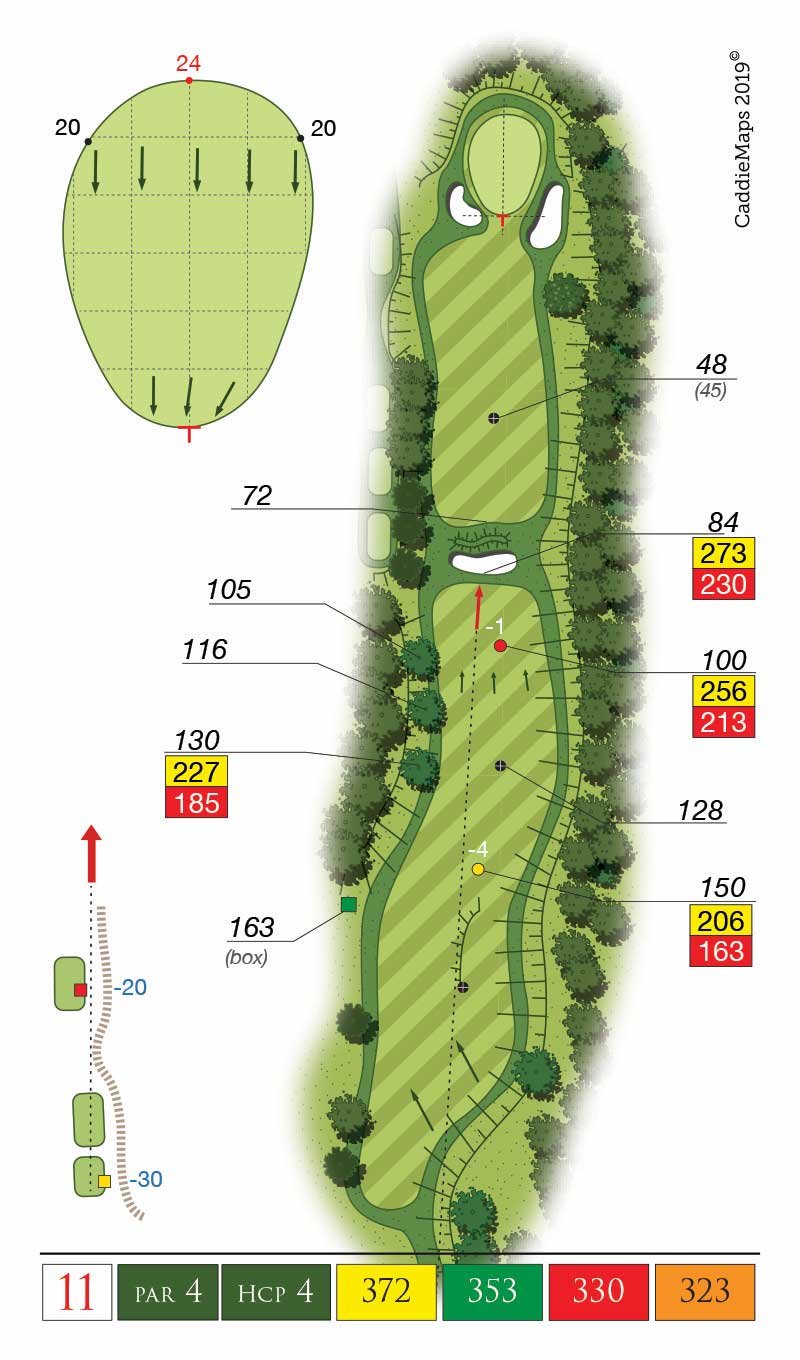 Assuming the fairway bunker has been avoided, a downhill drive between a casetta left and trees right is rewarded with one of the course’s flatter fairways. The square-ish bunkered-on-both-sides green rises very subtly to a higher tier back right. 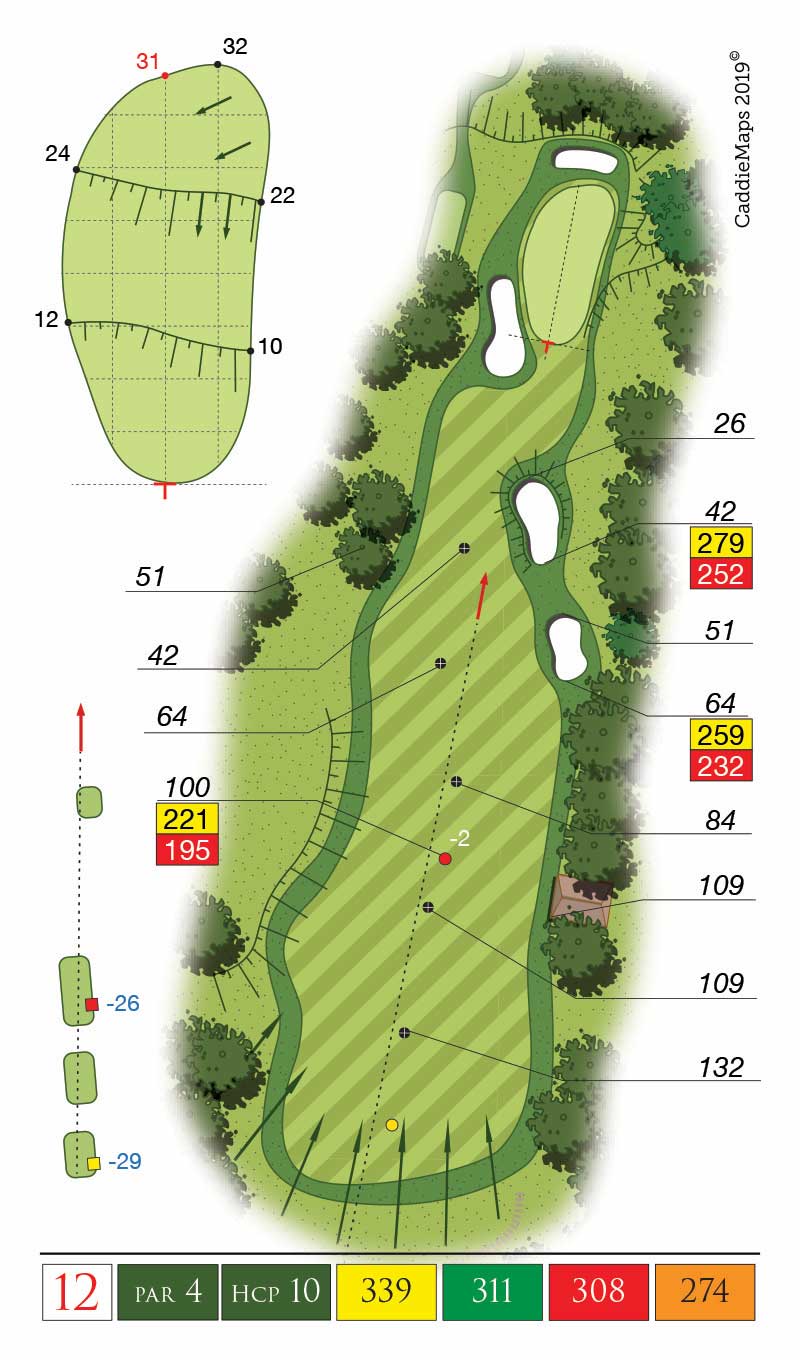 Drive over a descending bank down to the course’s widest, flattest landing area, overlooked by a casetta on the right, before a relatively short iron to a deep, oblong-ish green, bunkered at front, back and sides, rising gently to the rear over a subtle brow. 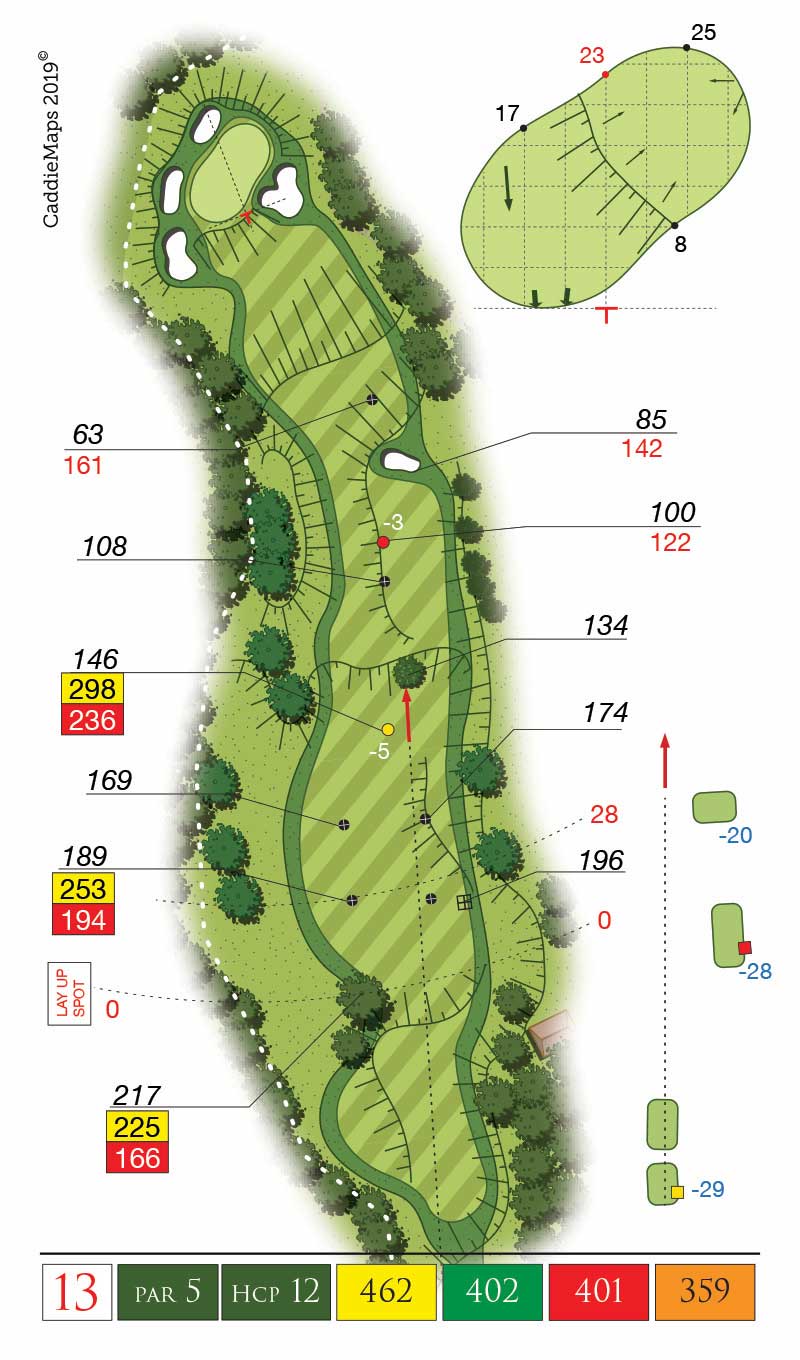 The hole with the biggest drop on the course requires a long drive into a valley, whence, if going for the green, the second is blind over a bunkered ridge. Reached in three, the approach is best played from the top of the ridge down to a triple-bunkered raised green, angled to, and rising to a higher tier on, the right, whilst also sloping gently up to rear. 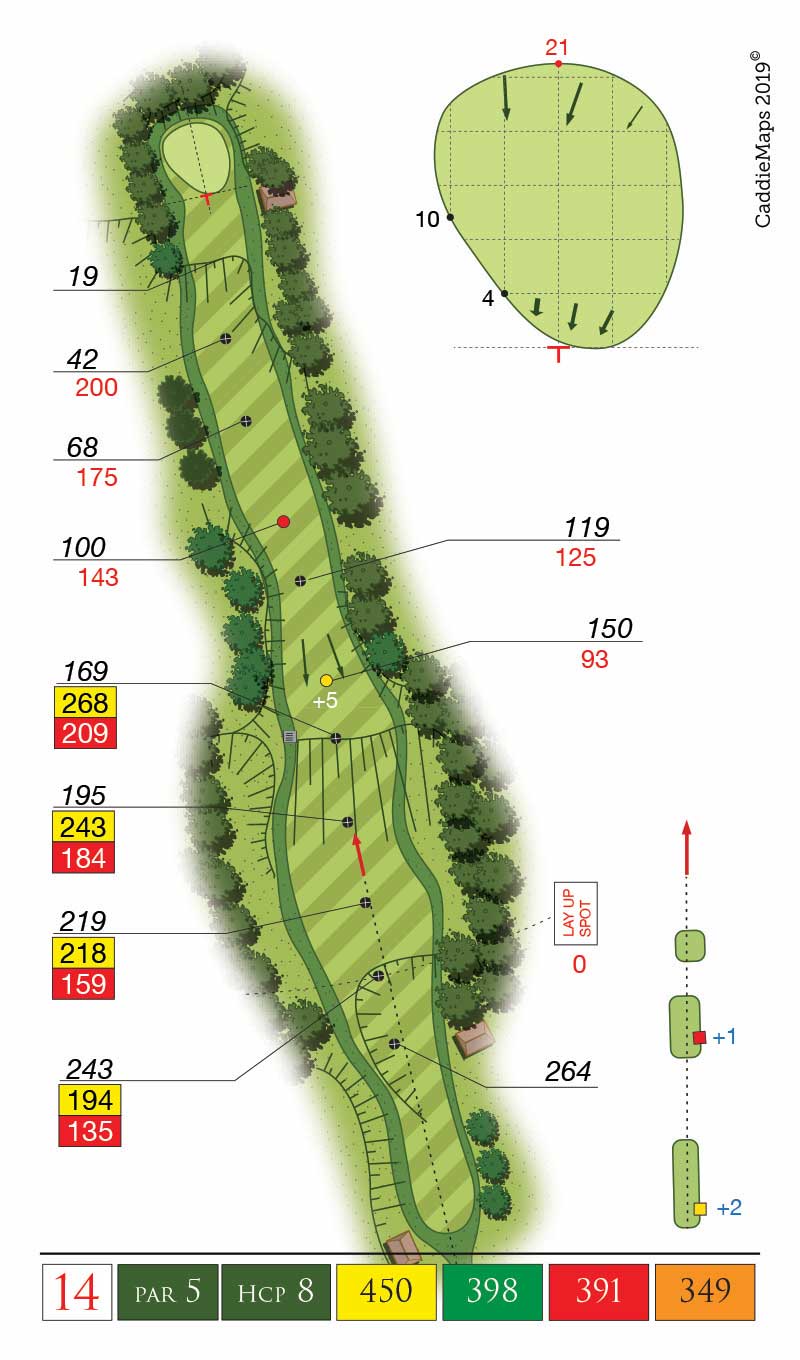 The hole with a casetta (left of centre for the drive) closest to the normal line of play, drive downhill past into a valley (with a second casetta, right), whence play uphill over a blow for a view of the subtly-sloping green, which is overlooked on the right by a third casetta, concealed on the left by a mound, and reachable in two only by long hitters. 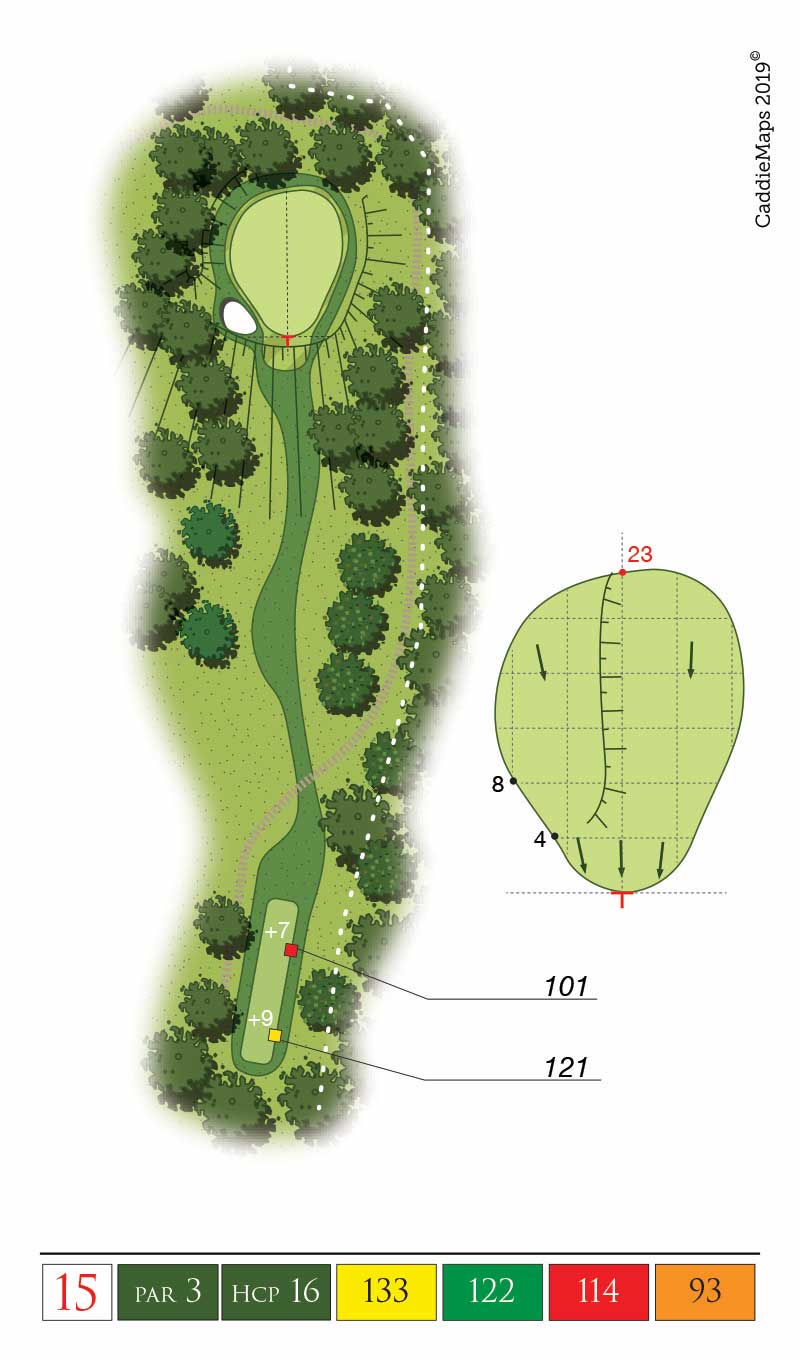 Playing longer than it measures, uphill between trees, and invisibly bunkered on the left, the green of this one-shotter features a mildly higher tier along its left hand side approach, but only its front left lip is visible from the tee. 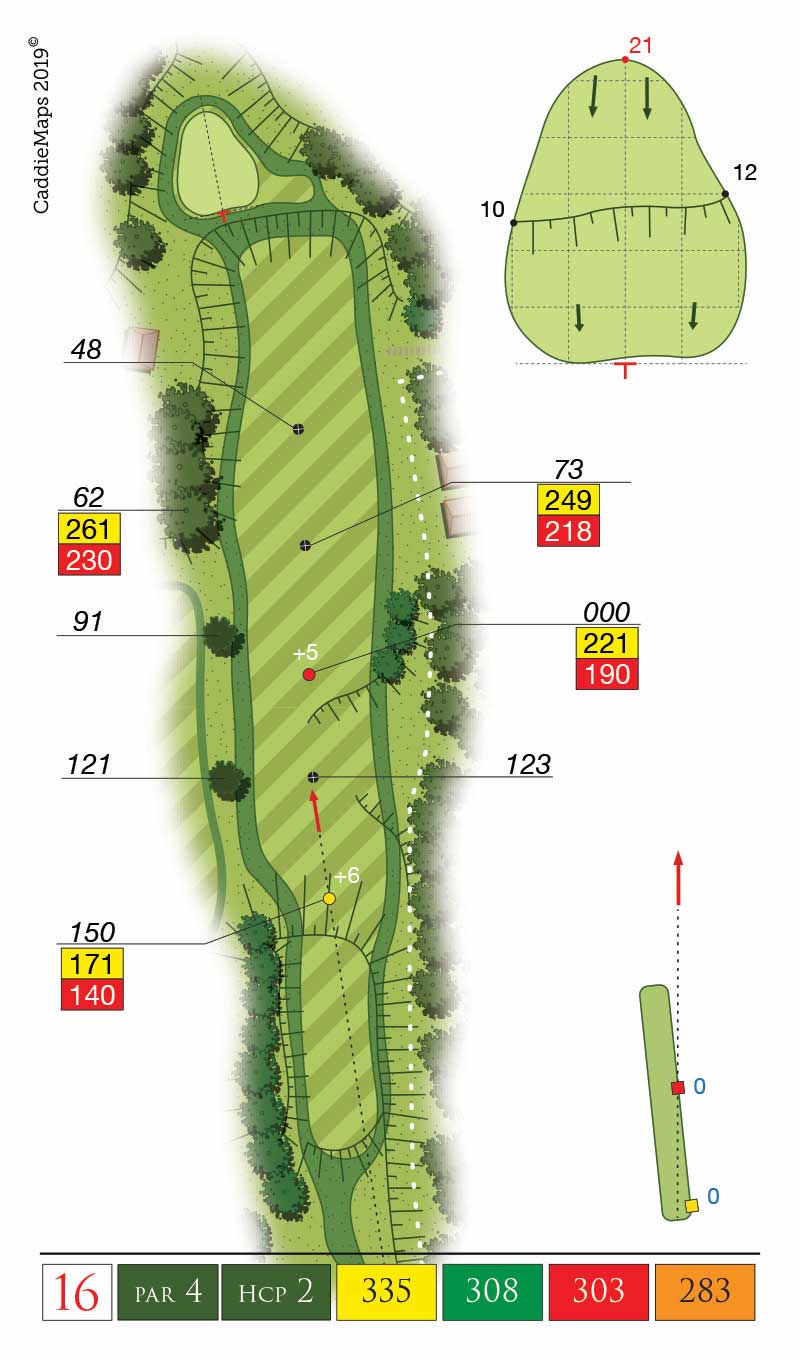 The rising fairway of this attractive roller-coaster two-shotter lies below the level of the tees, from which it is hidden by a ridge; thence a relatively short second to a triangular-ish, front right up to back left rising and narrowing green, above a steep bank and naturally shelved into the base of a grandstand slope.
The refreshingly-cool-in-summer shaded track running down the right side from the tee (avoiding the climb over the ridge) is known as “The Good Golfer’s Path”. 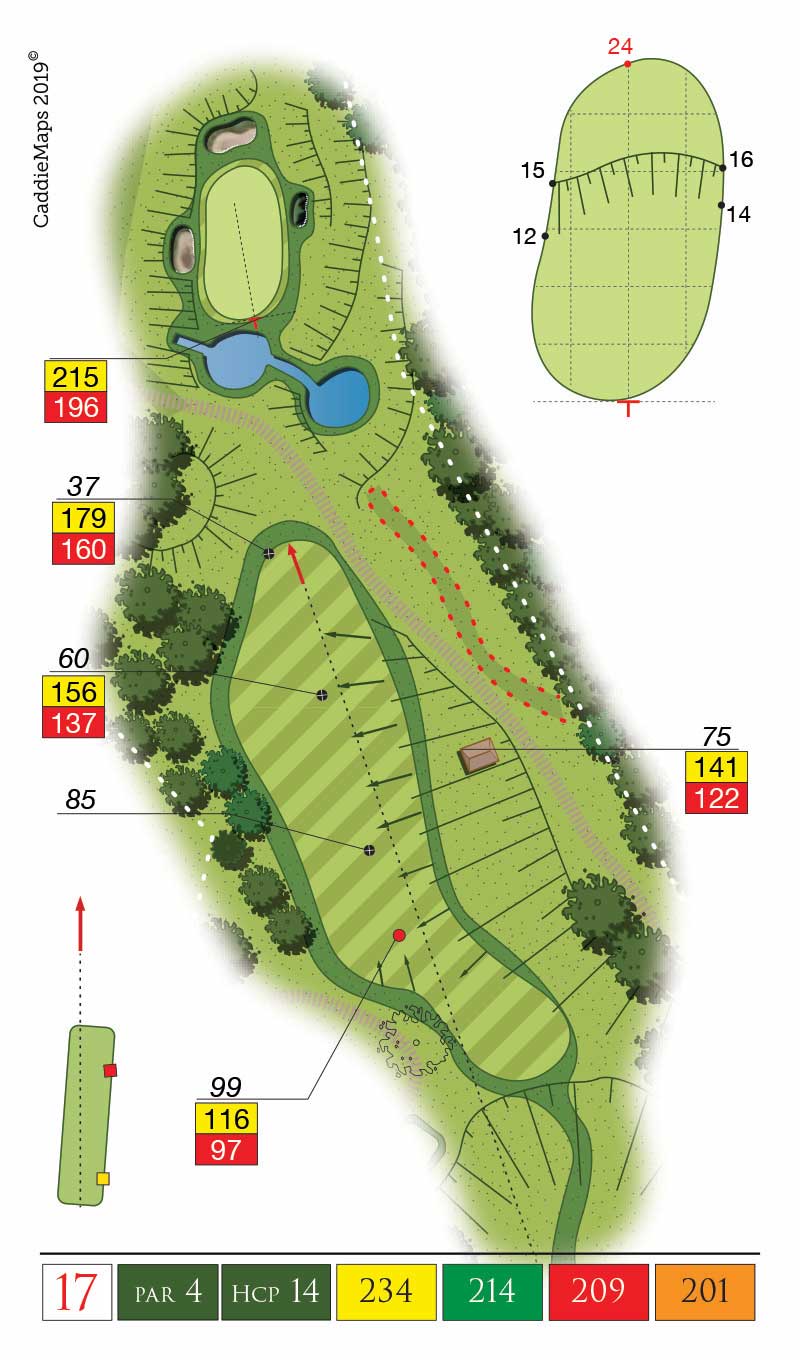 A mild left to right dogleg semi-blind from tee to fairway, with the course’s last casetta right and dominant specimen tree left, sloping down to a triple-bunkered green beyond two small ponds at the front, and rising to a small tier at the rear. Safer reached in two. 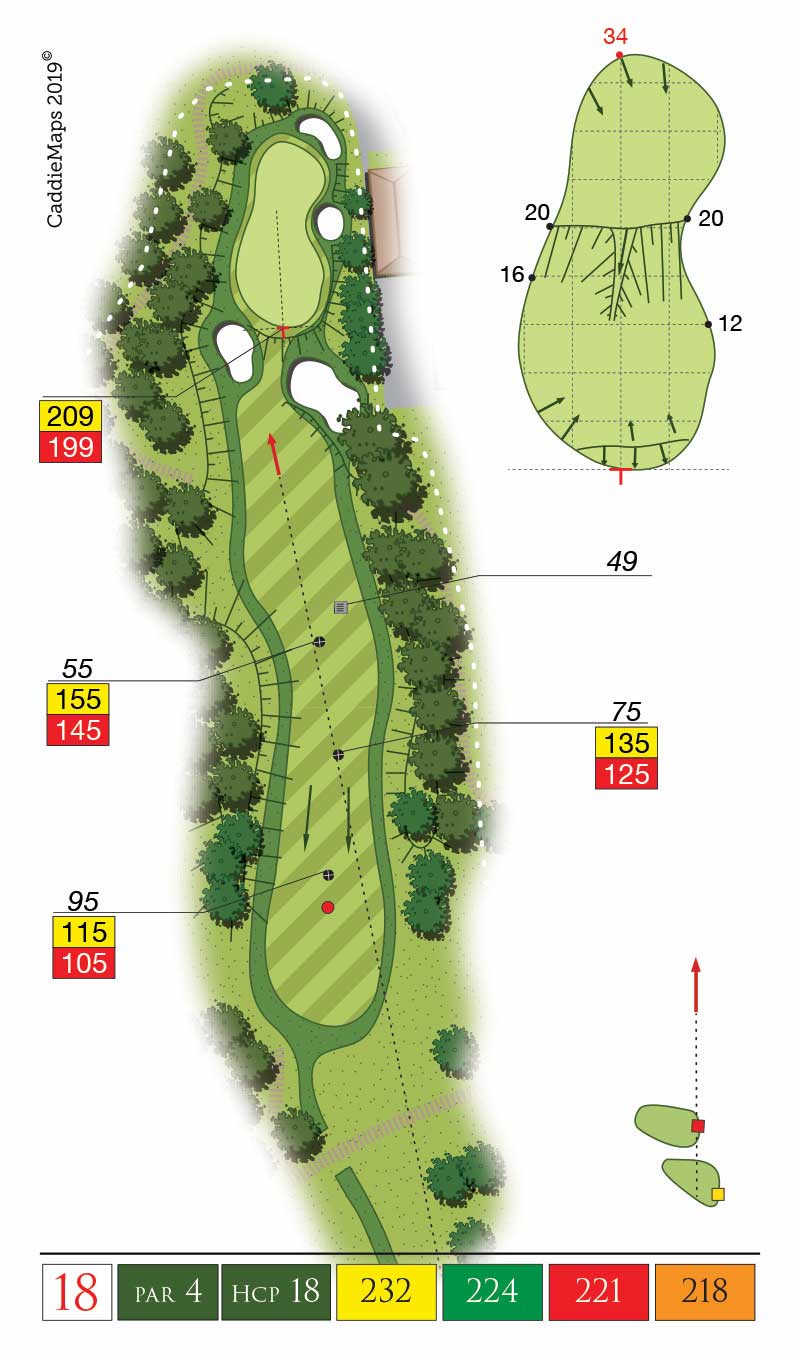 This hole is known as the “Signature Hole” of Menaggio &amp; Cadenabbia Golf Club. It’s unwise to drive the finisher, either: although straight, the lie of the trees makes it feel as if it sweeps from left to right, as it narrows between them, to a raised green, defended by sand front and right, rising in phases to the back, whence a grand vista of Lake Como. This brings us home in 2754/2423mt Par 36/36